Jason Mould Tell You Something About Plastic Injection Molding: Past, Present and Future 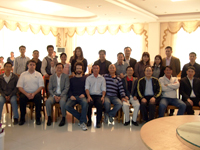 Today,Jason Mould tell you something about plastic injection molding: past, present and future.

Plastic injection molding is a process that forces liquid plastic into a mold to make custom plastic name plates, plaques, signs and product branding elements. Once the plastic cools and solidifies, it releases from the mold to form a variety of plastic parts for any industry. Popular uses of injection-molded include: appliance name plates, name plates for industrial equipment, car emblems, vehicle branding and license plate holders, as well as product identification for recreational products.

Injection-molded plastic name plates and other components are produced by a machine that consists of three basic components:

The molten plastic used for injection-molded products is produced by melting small plastic pellets, which are fed into an injection machine heating the pellets to a molten or liquid form.

Once the now molten plastic pellets reach a predetermined temperature the semi liquid is forcefully injected into a mold. The speed and pressure of this process is controlled by a hydraulic cylinder that, once engaged, forces the liquid plastic into the mold.

In “dwell” phase of the plastic injection molding process, the plastic is left in the mold to ensure that it completely fills the mold and then allowed to cool to the point where it solidifies and the desired object is produced. It is then ready for secondary processes as decoration, sub assembly, or shipment.

The injection-molded plastic process allows manufacturers to produce custom plastic name plates and components that would be too costly to make as intricately by utilizing traditional machining methods. Injection-molded plastics also saves time and money by allowing many pieces of the same component to be made at the same time, from the same mold; each copy identical to the one before it. This process also reduces labor costs by minimizing the need for manual labor from employees. There is also nearly no wasted material, as any unused or left over plastic can be re-cycled to be reused in the process

The History of Plastic Injection Molding

Plastic injection molding originated with chemists in Europe and The United States who were experimenting with plastics. Originally it was done by hand and pressed into a mold using Parkesine but it proved to be too brittle and flammable. John Wesley Hyatt is the official inventor of plastic injection molding and the process has a rich history with brilliant minds.

John Wesley Hyatt was a creative inventor and developed the processing of celluloid plastics. This was an amazing feat for a young printer from Illinois who took on the challenge from the New York Billiards Company to replace the ivory that was used in billiard balls.

So began his career in plastics engineering as he and his brother Isaiah started making several mixtures for checkers and other objects. After some time trying various mixtures, John mixed nitrocellulose, camphor and alcohol together. He pressed these ingredients into a circular steel mold that was heated and allowed it to cool. When the material was removed from the mold, he realized that he had successfully created a billiard ball composed of plastic. Thus began the process of plastic injection molding.

John and his brother Isaiah patented this process of producing celluloid in 1870 and continued by making dentures from their new material which replaced dentures made of rubber. Thus began the manufacturing process of celluloid plastics. John was quite like the Da Vinci of industrial invention because he also was credited with the invention of the sewing machine and roller bearings all of which contributed heavily to manufacturing.

Today, Celluloid and Cellulosic plastics can be found almost anywhere including screwdriver handles, tooth brushes and utensils. Celluloid can be found in Hollywood, California today and is used for production of your favorite films.

To further the processes of plastic injection molding another great inventor came into plastics actively in New York after traveling from Belgium on a fellowship. Leo Hendrick Baekeland began working with polymers and this lead to his invention for Kodak Eastman which was Velox. Velox is a photographic paper which could be developed in gaslight instead of sunlight.

As a chemist he made several developments in this field also going on to investigate how polymers were molecularly structured. These investigations lead too many inventions and discoveries beyond what chemists had discovered thus far about coatings and adhesives.

In 1926 Eckert and Ziegler invented the plastics molding machine in Germany which was the first successful machine used in manufacturing plastics. This brought injection plastic molding on the production line successfully.

Many more creative inventors have come through the process of plastic injection molding in history and it has come through an even finer process for production in today’s products such as appliances and name plates, signs and plaques.

Today, plastic injection molding manufacturers use vertical and horizontal presses, injection screw presses, electric presses and hydraulic presses for whatever rate of pressure is needed to complete the product pressure to form. This process produces everything from car parts to license plates and even toothbrushes.

While the improvements in the plastic injection machinery continue, the future of injection molding is now turning its attention to the molds and mold components. High tech plastic molds can be made of metal, epoxy or carbon fiber and can increase output through faster cooling times and cycle times.

Some innovative minds have even been working with corn seed producers to replace traditional petroleum based plastic into corn starch based plastic. l Biodegradable material is currently being used on a limited scale and there are many uses this material could soon have that would astound the mind. All it would take would be the mold and the material to produce a new wave of the future for plastics engineering. Scientist are still researching polymers the way they did when plastic injection molding began and their research is unbelievable at this point with many possibilities to come.

What are the aesthetic applications in the product design of beauty instrument injection molding production company?

Only when modern products have good quality characteristics can they meet the increasing aesthetic requirements of consumers. For the product design of beauty instrument injection molding company, it has always been our pursuit and goal to present products to customers in a more beautiful…

The effect of injection molding is very satisfactory

1. High efficiency
Injection molding technology is very convenient and fast, and can realize mass production. Why? Because injection molding is to add some materials to the barrel for heating, inject the materials into the mold cavity after melting, and then wait for cooling. After…

What are the characteristics of plastic mold manufacturing and processing?

Today Jasonmould will discuss why we need to compressed time…

Suggestions on the installation of injection mold

1. Preparation before installation
Confirm the cooling water channel, and the screw depth into the machine plate is 1.5-1.8 times of the screw diameter. If the screw is not enough, it is easy to slide the teeth, and there is a risk of mold falling….

Lettering on the surface of injection mold

We often see all kinds of patterns and Numbers on plastic pieces, and these Numbers are different. How to carve these Numbers and patterns on these molds, we have these kinds of common methods.
The first is directly through the engraving machine engraved on the…

Why do injection products flash? Flash burr may occur during injection molding, which is largely due to the failure of mold or machine clamping force. It affects the quality of the product, we need to understand the cause of flash.

Why do injection products flash?

One of the common problems when CNC milling is used in mold machining is the surface finish. There are many reasons for the poor surface quality or change of the workpiece processed by the mold:
The first reason is that the tool is too blunt….